Hey there buddy, did you happen to catch this week's episode of Hippie Love Turbo, on KUCR 88.3 FM? Well, here's a bit of a summary of some of the things I talked about. 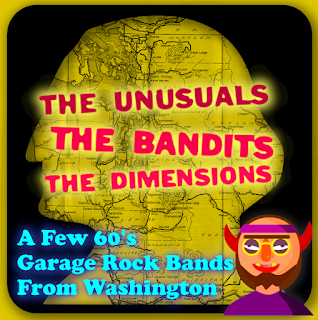 Sometimes these patterns form when you are putting a show together and you don't even realize it and this week, I ended up played a few bands from Washington. First you heard The Dimensions song Knock You Flat and I said that the band was from South Seattle. While researching the band I came upon a website that briefly mentioned that the band often played at a roller rink named the Lake Hills Roller Rink. As it turns out, the Lake Hills Roller Rink was somewhat of a cultural hub in the Bellevue's Crossroads area and maintained an active music scene well into the 80s where the musical focus shifted from garage rock, to psychedelic, and eventually heavy metal. The scene was started by KJR-AM (sadly a sports talk station now) DJ Pat O'Day who spoke a bit about the roller rink in 2018.

The next Washington band you heard was The Bandits, who came from Mercer Island, Washington, which is a short distance southwest from Bellevue. Mercer Island is known for being a more affluent region of the Seattle metropolitan area and, as is the case with most "well off" neighborhoods, it's a bit harder to find anything interesting culturally beyond real estate, shopping centers, or country clubs. However, for fans of public art, the island has a bunch of outdoor sculptures such as: the punny named Handsome Bollards at Luther Burbank Park which are aluminum hands that act as bollards, an oversized bronze rabbit which has a child leaned against it while reading a book named Between Two Worlds, and Kenton’s Dragon, a giant steel and concrete playground equipment dragon that replaced a similarly shaped sculpture that was also designed by Kenton Pies in 1965.

Wrapping up the Washington bands, you also heard I'm Walkin' Babe by the Bellingham band The Unusuals. Bellingham has had a diverse music scene throughout the years but, without a doubt, the most famous band to come from Bellingham is Death Cab for Cutie which you may recognize from a cover of their song I Will Follow You into the Dark that you heard at your local coffee shop's open mic. If Death Cab isn't quite your musical style of choice and you dig bands like Pavement, Sebadoh, or Built To Spill you should check out a short-lived band from Bellingham named Crayon and more specifically their only full-length album Brick Factory. However, if you'd like to stick with a garage rock sound then I suggest listening to Mono Men's 1994 album Sin & Tonic. It's definitely more a product of the 90s than the bands you usually hear on the show but I feel like those types of bands also have their time and place. You can hear Mono Men briefly talk about hazardous bubbles which floated through Bellingham in the definitive documentary about grunge music, HYPE! (1996).

Thanks for reading the blog and be sure to listen to the show on KUCR 88.3FM on Sundays at midnight or through KUCR.org! If you'd like you can also listen to KUCR through Radio Garden or Tune-In.

Enjoy this episode's playlist below: