On this episode of Hippie Love Turbo, on KUCR 88.3 FM you heard Bo Diddley play his song Aztec and I spoke a little about Diddley's love for strange guitars. When Diddley first started playing guitar he didn't have the funds to buy a real guitar so, as the famous story goes, Diddley made his first electric guitar by scrounging together parts including a pickup designed from an old Victrola record player's electronics. As time went on, Bo's early guitar building continued to inspire the designs of his many custom guitars with the most popular designs being produced by Gretsch.

Some of Diddley's stranger guitars included built in effects, equalizers, synths, and featured wild shapes that, if we are being honest, looked like chopped up coffee tables. All that being said, Diddley was a great showman and his guitars reflected his innovative personality. 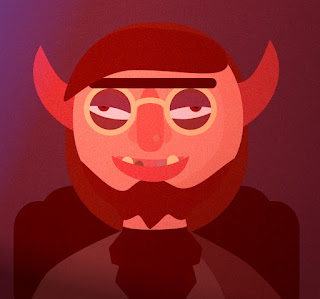 Later in the show you heard this week's far out movie recommendation; the 2010 psychological horror film Beyond the Black Rainbow! The film follows Dr. Barry Nyle, the lead researcher of an experimental new age facility which melds science and spirituality, and his mysterious captive test subject Elena. As the film progresses you are given short glimpses into the history of the facility and the roles Dr. Nyle and Elena play in the motivations behind its creation. Beyond the Black Rainbow is a fairly slow burn that bombards your senses with deep saturated colors and an ever-present droning soundtrack, however, the film lacks the usual hand-holding exposition dumps found in other science fiction horror films which leads the viewer to constantly question what will happen next.

Firstly, what I like about the movie is the sensory overload and claustrophobic closeups which are contrasted with the sprawling facility. The most obvious visual comparisons are to 2001: A Space Odyssey and THX-1138 but there are also scenes that remind me of the experimental horror film Begotten and during the later sections in the film, 80s slasher films such as the original Friday the 13th. Because the film had a fairly lean budget for its high cinematic aspirations, there are times that the abundance of tight shots and highly saturated lighting choices feel as though they aren't simply aesthetic choices but also practical ones. As you may know, the use of closeups and darkness can help conceal the lack of big budget set pieces. I wouldn't necessarily say that it negatively affects the film but I know there are probably people out there that would be turned off by such things.

Secondly, the soundtrack and ambient soundscapes in the film are relentless. There's hardly ever a moment of silence throughout the entire movie which is reminiscent of films like Eraserhead, or once again, Begotten, except with there's more synthesizer droning à la 80s John Carpenter. Some may find the soundtrack distracting but I really dug the way it built tension and if you are willing to watch this movie at a fairly decent volume, I feel that the soundtrack becomes an integral part of the setting. In fact, I'd even go so far to say that at times the soundtrack made me feel as though I should've been watching this film on VHS through an old CRT.

However, and to me it's a big however, Beyond the Black Rainbow drops the ball at its conclusion. With a movie that's such a slow burn you need some sort of payoff at the end and instead the film subverts this expectation with a fairly abrupt and underwhelming ending. I could say that it was a fairly brave move but it comes off as hasty and rushed. I've seen other internet dweebs (besides myself) complain that the slasher-esque sequences felt out of place but my ultimate gripe would be that the film's ending doesn't follow the same pace as the rest of the film. I am completely okay with unexpected endings, in fact I usually find them refreshing, but I feel that the movie needed to give more attention towards what became of the telekinetically powered Elena. I'd rather not spoil the film for you so sorry if that's all a little vague.

If you like trippy movies like Altered States or heady 80s low budget horror then you'll probably find the movie worth your time, especially if you have a passing interest or appreciation of the dark side of New Age aesthetics.

That's it for this episode! You can catch the next episode by tuning your radio into KUCR 88.3FM on Sundays at midnight or through KUCR.org! If you'd like you can also listen to KUCR through Radio Garden or Tune-In. As always, you also listen to this episode's playlist below: