This episode of Hippie Love Turbo, on KUCR 88.3 FM was springy, full of twang, and had a hint of sandy residue. Yes, it was another Surf Special! This year's surf special was packed full of tunes and, like most of the songs you heard on this episode, I didn't have much to say. However, I did mention some of my favorite beach activities, such as exploring the caves and coves along the southern California coastline. 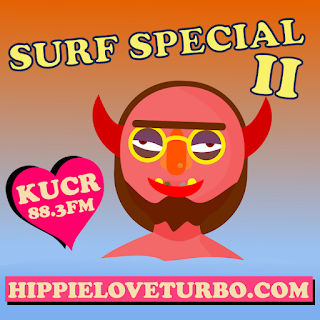 Some of my personal favorite coastline caves are in Malibu, both at Leo Carrillo State Beach
and El Matador State Beach which are only about 6 miles apart. Of course, if you want to check out tide pools and rock features a little closer to Riverside, you can always check out some cool beaches in Laguna including: the Beach Cave at Thousand Steps Beach and the coves at Treasure Island Beach. I'd like to visit some more coastal rock formations this summer and am curious to what your favorites are, so let me know!
Later on in the episode you heard The Vaqueros play their song 80-Foot Wave and I talked a bit about how, back in 2018, professional surfer Rodrigo Koxa actually surfed an 80-foot wave in Nazaré, Portugal, smashing any previous big wave surfing records. Seeing the photographs and video of the event are awe-inspiring but I could only image how stressful watching Koxa's feat live, let alone being the man on the surfboard. Of course, watching the videos you can see the importance of Koxa keeping his cool because any misstep would certainly lead to disaster. If you have a hard time visualizing what an 80 foot wave would look like, imagine a wave reaching about halfway up UCR's Belltower!

Thanks for reading the blog and be sure to listen over the air on KUCR 88.3FM on Saturdays at 9pm, or on Mondays at 10pm PST. You can also listen through KUCR.org, Radio Garden, or Tune-In.

You can check out the playlist for this year's salty surf special below:

On this episode of Hippie Love Turbo, on KUCR 88.3 FM you heard some wild tunes including one by Mark Markham & The Jesters named Goin' Back to Marlboro Country.

If you aren't familiar with Marlboro Country, it was part of Philip Morris' advertising campaign which helped steer the Marlboro cigarette brand away from earlier attempts to capture a female audience towards a presumably larger or more loyal male customer base. According an article from March 23rd, 1927 in Advertising & Selling, Marlboro was one of the first tobacco companies to specifically target women. At the time advertising to women smokers was considered taboo despite the fact that there was a large female smoker market, which was estimated to bring in revenue in the hundreds of millions. Supposedly, the early campaigns were so successful that Philip Morris received positive unsolicited mail from various female costumers, praising the product, which was fairly unheard of at the time. As the advertisements continued to gain success, Marlboro strengthened their focus on their female audience and, according to an article in the July 15th, 1957 issue of Newsweek, the company developed its signature flip top packaging as a way of protecting their cigarettes from the smell of perfume that often accompanies the inside of a woman's purse. However, as Marlboro later began using tattooed men in their advertisements, the box was instead touted as a way of preventing the cigarettes from being crushed while simultaneously keeping them fresh.

I'm not sure what led Philip Morris to change their advertising tactics, but the early masculine focused campaigns are pretty laughable by today's standards with advertisements featuring slogans such as: "A lot of man...a lot of cigarette.", "Man-size taste of honest tobacco comes full through.", and "Where there's a man...there's a Marlboro."

During Marlboro's venture towards masculine advertising, they eventually began using cowboys and western themes which led to the creation of the famous Marlboro Man ads which lasted until the late '90s and kicked off their use of the phrase "Come To Marlboro Country."

Although the Marlboro Man ad campaign lasted for several decades it was often targeted by critics for its romantic depictions of smoking. One of the first successful attacks against the brand's advertisements and the effects of smoking, took place in 1976 with a television documentary directed by Martin Smith titled Death in The West. The film follows several men that fit the hard working, masculine, rancher profile of the Marlboro Man, however, with more realistic portrayals of the chronic smoker. Visually, the most impactful depiction is of John Holmes, who suffered from emphysema and it seen working with an oxygen tank as he describes his health struggles as feeling; "as if someone has their fingers down in my chest." Dispersed throughout the film are testimonies by doctors and Philip Morris executives that serve as counterpoints either downplaying the effects of smoking or emphasizing the harm cause by cigarettes.

After the Death in The West first aired on British television Philip Morris acted swiftly and sued the filmmakers and Thames Television, who first broadcasted the show, in order to block any future rebroadcasts, particularly in the US. Mother Jones magazine described the film as being "one of the most powerful anti-smoking films ever made" and explained in an article from January 1979, that it was unlikely that wider audiences would ever see the film due to Philip Morris' legal battles with Thames Television. Eventually the documentary did make its way to American audiences via PBS stations in various markets. You can view the film here and read about some of Marlboro's models' deaths from cancer, here.

Anywho, that's some insight into the strange world of cigarette advertisements and although it was loosely related to the episode (very loosely), I thank you for reading the blog. Be sure to listen over the air on KUCR 88.3FM on Saturdays at 9pm, or on Mondays at 10pm PST. You can also listen through KUCR.org, Radio Garden, or Tune-In.

On this episode of Hippie Love Turbo, on KUCR 88.3 FM I kept the talking parts pretty brief, so here is a quick rundown on some of the stuff I talked about:

I started the show with Terry Knight and The Pack's song How Much More and I mentioned that the group had a hit with their version of I (Who Have Nothing) which was also covered by Ben E. King and, perhaps more famously, Tom Jones. Here's a neat video of the group making a television appearance back in 1966. During the video, Terry is briefly interviewed as he talks about being from Flint, Michigan before the group "performs" on some bleachers.

Later on, you heard Don Gardner perform My Baby Likes To Boogaloo and, much like Terry Knight, Gardner also performed a song that Tom Jones covered. However, unlike Terry Knight and The Pack, Don Gardner co-wrote his hit, I Need Your Lovin'. My favorite version of the song, beyond the original, is Otis Redding's version from his first album Pain In My Heart.

When I played Gary Indiana's own Oscar Hamod and The Majestics' No Chance Baby, I talked about how they performed a fuzzed out psychedelic version of House of The Rising Sun and how I'll probably play it sometime in the future. Well, if you are impatient, I suggest checking it out!

That's just about it for this episode! Thanks for reading the blog and be sure to listen over the air on KUCR 88.3FM on Saturdays at 9pm, or on Mondays at 10pm PST. You can also listen through KUCR.org, Radio Garden, or Tune-In.

Terry Knight and The Pack - How Much More
The Caravelles - Lovin' Just My Style
Thee Kavaliers - Congregation For Anti Flirts Inc.
Headhunters - Times We Share
The Stoned Circus - Feel