I've been using impulse responses for sometime now but it's only been recently that I've decided to make my own. What is an impulse response? In basic terms, impulse responses are files that capture the audio characteristics of something and give you the opportunity to apply those characteristics to your own audio. People mostly use them to copy the reverberation of a room or the sound of a certain guitar cabinet. I'll admit that I hardly understand how it works but you essentially take your audio source and run it through an IR and now your audio sounds like it's being played somewhere else, through something else, or both. IRs allow you to make sounds in places that you've never visited using countless amounts of gear. It's really outta sight. 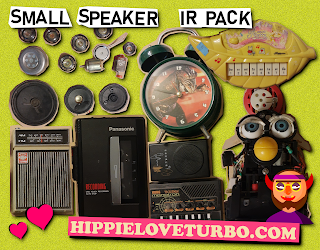 While I don't have any fancy boutique amps I do have a bunch of old speakers that I've collected over the years that were all salvaged from toys, calculators, and other random objects that I've destroyed during my circuit bending escapades. Today I decided to finally put them to use by making IRs that I can use whenever I make music. While I was making them I thought that I might as well put them out there in the world for others to use. However, because I was originally planning on just using them for myself I didn't name any of the IRs (doh) and I haven't really messed around with their individual volumes. So when you use this pack keep in mind that it's not close to what you'd expect from a retail release. Don't get too hung up on which IR belongs to which speaker and device. Just use whichever one you think sounds best for your application.

Typically I load all my speaker and cab IRs through Audio Assault's aIR Impulse Rack which I like because of its' simple interface and ability to load multiple IRs simultaneously. Stacking IRs can lead to unique sounds that would be difficult or impossible in real life and mixing your signal with my small speaker IRs can give you a cool lo-fi sound. Have you ever wondered what a Marshall amp would sound like if it was ran through a bootleg Godzilla alarm clock? Now you can find out!

To record the IRs I made an adapter by soldering some stiff wire to an RCA plug and some alligator clips. Everything was then housed in a spare Bath and Bodyworks body spray cap. Remember to recycle, reduce, and reuse! The alligator clips allowed me to run a sine sweep signal through the speakers without worrying about soldering anything to them or damaging the speakers in the process. I ran the sweep file from my Focusrite's monitor output and connected the alligator clips to each speaker's hot and ground. Simple!

When I recorded the loose speakers they sat on my desk while I mic'd them as closely as possible. For the other speakers I left them in their respective cases because the plastic grills and housings influence the way the speakers sound. The mic I used was the AKG Perception 170 and to generate the IRs I used my favorite DAW, Reaper and the ReaVerb plug-in.

Here's a list of some of the devices I recorded:

Below you'll find an example of what some of the IRs sound like. I ran my Squire Strat straight into my interface and used LePou's amp sim Le456. You'll hear my bridge's humbucker, then the middle single coil, and finally the neck's single coil.
First I played the dry signal and then everything else was 100% wet.


Although my example is using a guitar you can use the IRs on anything. I like mixing the dry and wet signals with the Izotope Vinyl VST to get a sort of vintage budget garage sound. If you end up using the IRs let me know! I'd love to hear what you come up with.
Small Speaker IR Pack Download