Here's the rundown on what you heard on this episode of Hippie Love Turbo, on KUCR 88.3 FM. Firstly, I talked about The Syn and how they played regularly at London's historic Marquee Club which was open from 1958 to 2008 and had hosted many legendary artists during their prime. In particular, they played with Jimi Hendrix during one of the busiest nights in the club's history. There's a lovely site about The Marquee Club which features an interview with Peter Banks where he mentions performing with The Syn while famous music groups such as The Beatles and Rolling Stones watched on.

"I didn't enjoy the night at all because Syn had to play two sets and we had, you know, a lot of pretty famous people in the audience and we had to come on and do one set, go off, and then come back and do another set, which was a terrible thing to do because everybody certainly didn't come to see us!" -Peter Banks

The Syn disbanded some time in '67 but reunited in 2004 with a completely different sound. The band released Syndestructible in 2005 which featured songs that were less psychedelic/garage sounding and more prog rock-ish which makes sense as both Chris Squire and Peter Banks left The Syn to form Yes. If you're like me and you don't know a lot about Yes I'm sure you'll still recognize their song Owner of A Lonely Heart which itself marked a change in Yes' sound.

Later in the show I talked about the group Los Shain's and how they were from Peru's capital Lima. Lima is home to the Larco Museum which houses hundreds of Peruvian pre-Columbian art pieces including: ceramics, textiles, and metal jewelry. I know that it's fairly unlikely that I'll ever venture out to Peru, however, the Larco Museum has a fantastic virtual tour of the museum's permanent collection that's definitely worth checking out if you are interested in early Latin American art.

Speaking of art, I can't forget to mention this week's movie suggestion Style Wars, a movie about young graffiti artists and B-Boys set during the late '70s and early '80s in New York. The film is a documentary that was originally made for PBS and went on to gain a cult following over the years. When it comes to documentaries I tend to like films that serve as a snapshot for specific moments in time. In Style Wars you see a New York that feels like a smaller and more isolated version of itself. A New York that's composed of train tracks, bridges, service tunnels, and abandoned building as opposed to the bright lights and towering skyscrapers that you're used to seeing in our modern media. The kids featured in the film belong to a cultural subset with unwritten rules and ethos that set them against society.

Some of my favorite parts of the film feature the squares that try to understand the graffiti artists and their motivations for painting subway trains. New York's mayor Ed Koch, seems especially out of touch when he explains his idea of building fences in which vicious dogs can guard the sacred subway trains from vandals or how he seems convinced that his dopey anti-graffiti campaign will make a difference with the youth. 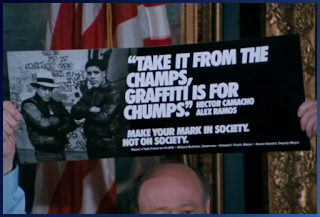 As you see subway trains completely covered in paint, both inside and out, you can understand why the authorities were frustrated with the graffiti, however, when they talk about the cleanup costs and how the pieces are eyesores etc. you can't help but giggle at how silly the whole thing seems. Everyone is completely unaware of just how important graffiti culture would become throughout the world and it's almost quaint when you hear people talking about how they can squash the city's vandalism problems.

Anyways, you can find this week's playlist below:

The Dept. of Sanitation - Don't Ever Leave Me

Dat En Wat - I Can Live Without You

This episode of Hippie Love Turbo , on KUCR 88.3 FM was a little bit of a contrast to last week's shorter songs, with a few tracks reac...