On this week's episode of Hippie Love Turbo, (totally not a repeat!) on KUCR 88.3 FM I talked about the third episode of the early 2000s television show Grounded For Life and how one scene in particular stood out for its honest take on a problem many music lovers have had to deal with over the years. I'm not talking about scratched records, warped tapes, or broken jewel cases but rather that moment where you hear a new or different song from an artist that you love and you can't help but think to yourself; "This sounds a lot like another one of their songs." Ah yes, the dreaded filler song. Nowadays it's not so much of a problem. You can pretty much find anything online for free or nearly free but back when you had to buy physical media it was a bummer hearing multiple tracks with the same melody or similar lyrics etc.

The example I gave on the show was The Trashmen's song Bird Dance Beat which is a near carbon copy of their hit song Surfin' Bird. In fact, they even reference Surfin' Bird in the lyrics!

Well, the kids here are a wailin' so let's do it now.
'Cause the Birdman's singing papa ooh mow mow.
If you've heard the Surfin' Bird you can't go wrong.
'Cause they're playin' and a singin' with a Bird Dance song.
However, I must admit that I forgot to talk about an even more blatant example in ? & The Mysterians' version of Can't Get Enough Of You, Baby which came out a year after their biggest hit 96 Tears. The two songs' intros are exactly, note for note, the same and the way the organ's chords pulse couldn't be more similar.
In the end, there are probably dozens of other examples of soundalikes but when you listen to this sort of music you have to keep in mind that there are only so many chords that you can use in rock n roll and the number of those chords are probably cut in half when you factor in amateur musicians playing open chords in their parents' basement/garage/shed. If you know of more artists that recycled their hits feel free to list them below and thanks for listening!

Last week's episode of Hippie Love Turbo, on KUCR 88.3 FM was the 50th Episode Special! Throughout this show's run I've never played the same song more than once but for the 50th episode I thought it'd be fun to revisit some of my favorites. 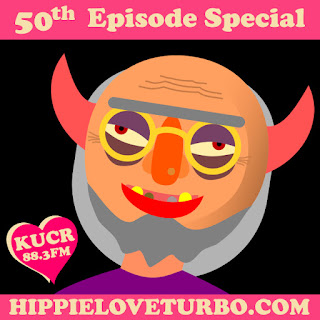 When I first got the idea of starting a new show I imagined that it would focus on bizarre and rare tracks such as library/production music aka Muzak or elevator music. I liked the idea of having a show that played music that wasn't intended for attentive listening but rather as background sound for when you were shopping or when a radio host needed to make an announcement. Eventually my idea for a show morphed into something that's a bit more palatable but you can sort of see traces of my original concept in the music I play during my speaking segments. I've never really talked about the songs that I use for backing tracks but there aren't very many. Below you'll find a playlist of my bumper music and after that you can find the tracks that I played on the 50th Special Episode! Thanks for tuning in and I'll catch y'all next time.

On this episode of Hippie Love Turbo, on KUCR 88.3 FM you heard The Others' cover of Howlin' Wolf's Smokestack Lightning and I talked about how the group (or some version of the group) recorded more music in 2012 and that I wasn't able to find any of it. Well, I guess I didn't look too hard because after the show I found the band's Soundcloud and YouTube channel. If you're interested in hearing their newer material I suggest that you first watch their live in-studio performance of Al Green's Take Me To The River which I first heard performed by a robotic fish. However, to my ears Big Mouth Billy Bass' version sounds more like the Talking Heads' adaptation.

Some of you out there might feel pretty nostalgic for good ol' Billy Bass. It's already been a over 20 years since the gag gift's big debut and I'm sure you may know of at least one person in your life that has one collecting dust in the attic, hiding in a box, or perhaps even proudly hanging up in the living room. Supposedly, Queen Elizabeth had one, as did George W. Bush, and my grandparents, but as with most fads Billy's popularity waned over the years after outselling another gag gift fad, the Pet Rock. According to the inventor of the Billy Bass, Joe Pellettieri, one of the main reasons sales plummeted was due to retail closures such as KB Toys and the drugstore chain Eckerd.

Although Billy Bass isn't as common as he used to be, the fish has inspired many tinkerers over the years and has popped up in many projects such as the wall of 75 Big Mouth Bass at The Royal Palms in Chicago, Donald Bell's Bluetooth hack, Ben Eagan's Echo Dot mashup, Simon The Magpie's Big Mouth Bass Guitar, as well as, a bunch of circuit bent versions such as OK Housecat's.

Now someone needs to find a way to hack a Chia Pet.

Check out this week's gag gift inspired playlist below:

On this episode of Hippie Love Turbo, on KUCR 88.3 FM you heard a song by the band Mike Stuart Span named Children of Tomorrow. The band's history is very complicated and I won't try to make heads or tails of it here but there is a great write up by a Reddit user named mindlesspleasures that summarizes the band's history fairly well. While it takes a while to wrap your head around the band's convoluted history, one thing that stood out to me is how every biography about Mike Stuart Span sort of glosses over the death of their guitarist Nigel Langham. According to the band's official website:

"Tripping on LSD, guitarist Langham fell to his death after leaping through an upstairs window. The band were left in a profound state of shock; despite the blandishments of the encroaching psychedelic era, the Mike Stuart Span subsequently became a resolutely drug-free zone."

If you've ever been curious about LSD and its effects on the human psyche you've probably heard the ever-present story of the reckless hippie, blasted out of his mind, discovering that in his altered state he has gained the ability to fly. Due to his inebriated state the hippie gleefully leaps from a tall window only to discover that he has, in fact, not gained the ability to fly and that his poor decisions lead to his untimely demise. It's one of those stories that gets repeated time and time again and I've always assumed it's been planted in everyone's imaginations by well-meaning squares but after reading about Nigel Langham I began to wonder much truth is behind the urban legend.

It seems that the most popular version of the story comes from the tragic death of radio personality Art Linkletter's daughter Diane Linkletter. Mr. Linkletter attributed his daughter's death to psychological damage caused by psychoactive drugs and said that the person who first sold Diane LSD was “the man who murdered my daughter.’’ Because Linkletter had killed herself by jumping from a building and because of her father placing the blame on LSD, the story took on a life of its own over the years and transformed into a cautionary tale of accidental death caused by being high in the wrong place at the wrong time. Snopes delves into the case and explains how evidence of Ms. Linkletter's drug use is actually fairly scant.

Nevertheless, as I began to do some more research, I discovered that Linkletter's death wasn't the first falling death associated with LSD. According to a United Press International article in 1966 Vernon P. Cox, who was only 20 years old, jumped out a third story bedroom window after saying: “as long as I’m on a trip, I think I’ll go to Europe." The article also claims that a police representative stated:

“You know how that stuff works. He probably thought he was a bird and tried to fly out the window."

Eventually the famous LSD proponent Timothy Leary was ordered to pay $100,000 to Cox's family after a judge ruled that Vernon was inspired to drop acid after attending one of Leary's lectures. The time frame makes it seem as though the lecture Cox may have attended took place at the first (and perhaps only?) LSD Conference in San Francisco. Regardless, this event helped cement the idea that LSD causes people to jump from great heights.

Years later the death of Ruth Moment Armistead followed a similar pattern to Diane Linkletter's when Armistead had leapt from The University of Texas' UT Tower after bouts of depression caused by mental breakdowns which her family associated with psychedelic drugs. Moment's death led her father to create a lobbying group known as the Legal Drug Control Society which pushed for stricter drug laws and at the time of LDCS' creation Mr. Armistead was quoted saying: “My daughter didn’t jump off that tower - LSD pushed her off.” For a more in-depth and heartbreaking analysis of the events which lead to Moment's demise check out this article by Christie Lypka.

Unfortunately, high-flying psychedelic deaths didn't end in the '60s and '70s and there have even been several documented cases within the last decade. While there are some kernels of truth to the acid induced leap of faith one should note that it's much more common to die from accidents related to legal drugs such as alcohol. Yes, drinking is more common than dropping acid, however, every person that drinks doesn't automatically become a drunk driver just as every person that takes a psychedelic trip doesn't leap out of a window.

If you gleam anything from this simple blog post it should be that acid is a serious drug that should be respected and some people are more vulnerable to its negative effects. Does that mean you shouldn't try it? I'll leave that up to you but if you're going to experiment with hallucinogenic drugs, you should understand the risks, have a trusted spotter, and stay away from dangerous settings including heights, train tracks, and volcanoes.

Although I don't agree 100% with his assessment, I'll leave you with a quote from Bill Hicks' 1992 comedy special Revelations where he discuses the matter.

Check it out. You don’t see ducks lining up to catch elevators to fly south. They fly from the ground, you moron. Quit ruining it for everybody."

Bram Rigg Set - Take The Time To Be Yourself