This episode of Hippie Love Turbo, on KUCR 88.3 FM was a Surf Rock Special!!! Everything on this episode was dripping with reverb and had a faint smell of salt and sunscreen. Things are starting to open up as the boring apocalypse (the Covid-19 pandemic) begins to fade away and like many others I am starting to dream of a summer filled with seaweed and sand. While we're not quite in the clear, you can still enjoy nature by participating in some fun and socially distant activities such as beachcombing, which is the process of searching the shoreline for neat artifacts, fossils, and seashells. In fact, beachcombing is such a well loved activity that there's even a magazine dedicated to it! 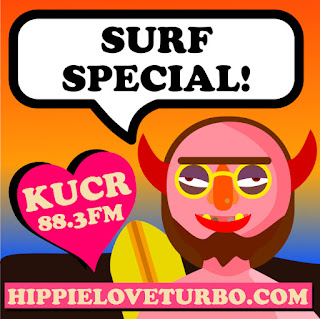 During the second set of the show you heard Newport Beach by The Super Stocks and I spoke a little bit about Newport Beach's preeminent surf spot that's known as The Wedge. The Wedge is mostly known for it's large waves which reach up to 30 feet, but there's also a tragic history to the surf spot which involves the death of a child and his father's quest to tame the wild waters through the creation of a jetty. Although I didn't play the song on this special, Dick Dale, who is most well known for his version of Misirlou, immortalized The Wedge in his 1963 song of the same name. If you can't head over to Newport but you want to check out The Wedge for yourself, there is a neat webcam which you can watch here.

Anywho, you can check out the sunburned surf special playlist below:

On this episode of Hippie Love Turbo, on KUCR 88.3 FM you heard Ty Wagner's garage rock classic I'm A No-Count and I spoke about how he was off the radar until he discovered used copies of his singles were selling for a decent price online and that there was a demand for his return. Ty only released a couple singles during the '60s, I'm A No-Count/Walking Down Lonely Street (1965) and Slander/I Think I Found Love (1966), which had some regional airplay but fell into obscurity until they were rediscovered on compilations such as Back From The Grave Volume 7 (1988) and Keb Darge And Cut Chemist Present: The Dark Side (2017). Around 2013/2014 Ty returned to the music scene as he began preforming live again, recorded some new material, and released another single featuring Misery Train/Soul Exercise which he had recorded in 1967. Interestingly, Ty Wagner is also known as Downtown Dennis and has a real estate company in Everett, WA. If you'd like to know more about Mr.Wagner there's a fairly comprehensive article written about him here.

For this episode's film recommendation I present to you Takeshi Kitano's 1989 action/crime drama Violent Cop. Prior to directing Violent Cop Takeshi Kitano was most well known for his comedic roles on Japanese television and his role as Sgt. Gengo Hara in the 1983 war film Merry Christmas, Mr. Lawrence starring David Bowie. Reader's may also recognize him as Vic Romano from the Spike TV show Most Extreme Elimination Challenge which was a edited and modified version of Kitano's Japanese game show Takeshi's Castle. In fact, Kitano has had a long and interesting career where he's dipped his toes into various forms of media including: comics, television, painting, and perhaps most strangely, video games with one of the most unusual games ever made, Takeshi no Chōsenjō. Although he's not a household name in the U.S. he remains incredibly popular in Japan.

Violent Cop follows the tough-minded detective Azuma and his rookie partner Kikuchi as they become intertwined in a case involving their colleagues and a local drug ring. However, the plot is fairly loose and meanders as Azuma displays his brand of tough justice a-la Dirty Harry. The flowing nature of the plot helps develop Azuma's character as a sort of wandering force of nature. Azuma is detached from reality as if he's merely watching his own actions unfold before him, unable to control his own destiny.

The world of Violent Cop is without remorse and just about every character lacks moral agency which leads to a few surprising (and often violent) interactions. Although the violence in the film doesn't feel overly gory (maybe I'm the wrong person to make that distinction) there are a couple instances where it seems as if Kitano had truly assualted his costars. The whole thing is a wild ride that has just the right amount of tension which leads to an explosively simple, yet unexpected ending. If you are a fan of gritty low-budget crime films I'd say this is one to add to your list.

As a somewhat unrelated aside, I noticed a mask that was used as a prop in the film's introduction matches a mask that I had used in an unrealized installation of sorts that I was working on when I thought I'd someday become an artist. Spooky, isn't it? 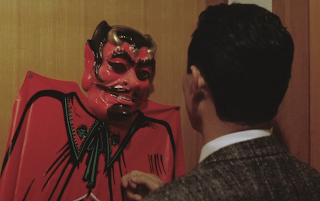 You can listen to this week's playlist below:

On this episode of Hippie Love Turbo , on KUCR 88.3 FM we started the show off with a Spanish cover of These Boots Are Made for Walkin'...