On this episode of Hippie Love Turbo, on KUCR 88.3 FM I was feeling a little under the weather so I didn't speak much and let the music do the talking. Here's a quick breakdown of the things I mentioned on the show.

That's about it folks! Thanks for reading the blog and be sure to listen over the air on KUCR 88.3FM on Saturdays at 9pm or through KUCR.org! If you'd like, you can also listen to KUCR through Radio Garden or Tune-In.

The Plymouth Rockers - Don't Say Why
Lords - She Belongs To Me

On this episode of Hippie Love Turbo, on KUCR 88.3 FM I played a strange Beatles inspired song, I'll Let You Hold My Hand, by an all-female group named The Bootles. I say "an all-female group" but in reality, I couldn't find any real solid information on the group beyond photos from their singles and their appearance on the cover of Girls In The Garage: Volume 2.

The band's gimmick appears to be that they wore wacky boots and if their sole single had been more successful, I'm sure their shtick would've been developed further. Imagine all the strange boots they could've worn! However, the world wasn't so lucky and the band fell into obscurity. What we do know is, their single was released on GNP Crescendo with the publisher credit being assigned to Neil Music Inc. The song itself was written by Chet De Milo and Mark Wiley who also worked together on the Eartha Kitt song No Second Chance, which appears to be difficult to track down as well. On the show I mentioned that I couldn't find any American releases of the single but upon further investigation I did find one listing on Discogs. Most versions of the single I found were released in Europe with covers that say something along the lines of the song being: "America's response to The Beatles." Of course, if you hadn't already figured it out, the song is a reference to The Beatles' biggest hit in America at the time, I Want To Hold Your Hand. If you'd like to dive deeper into De Milo's musical career I suggest you check out his unusual soft rock group Soft Soul Transition, aka SST (not to be confused with the another SST) and, since I mentioned Eartha Kitt, you should listen to her cover of one of my favorite Donovan songs Wear Your Love Like Heaven.

Continuing on with the Beatles theme, I had suggested during the show that you check out the compilation Beatlemaniacs!!!: The World Of Beatles Novelty Records which features a bunch of songs that attempted to cash in on Beatlemania. Most of the songs are fairly straightforward and honestly, a little forgettable, but it's a fun glimpse into The Beatles' massive cultural impact. My favorite track on the album is Link Wray's instrumental cover of Please Please Me, which is the only song on the album I could see myself listening to regularly. Probably because it's not really a novelty song. The other highlights of the album are The Fondettes The Beatles Are In Town, The Beatleettes Only Seventeen, Rainbo's John You Went Too Far This Time, and Terry Knight's Saint Paul.

John You Went Too Far This Time is a stand out track on the album because its singer, Rainbo, is best known today as the actress Sissy Spacek (Carrie, JFK, The Help). Before acting, Spacek initially pursued a singing career which apparently died after this release. If you are familiar with Spacek's acting career you may have already heard her sing during her performance in the Loretta Lynn biopic Coal Miner's Daughter. As for the song itself, well, it's quite a doozy. The song is strangely over produced with kitschy strings and horns behind lyrics that describe a young fan's infatuation with John Lennon. Eventually, the young fan explains how Lennon has gone "too far" as she reveals her disappointment over "that picture" which is probably a reference to the cover of John Lennon and Yoko Ono's album Unfinished Music No. 1: Two Virgins.

Now I gaze in awe before that picture.

My mind retires to the place it was before you came.

I love the things you showed me up 'til now, John.

But since that picture, I don't think my love will be the same.

At the time the cover sparked quite a bit of controversy due to its fully nude depiction of Lennon and Yoko. Famously, the cover was shipped with brown paper covers that censored the offending image and there were reports that shipments to New Jersey were ceased by authorities.

Of course, Lennon had also previously caused controversy in the US after an interview where Lennon compared The Beatles' success to Christianity and Jesus' disciples. John You Went Too Far This Time alludes to this incident with the lyrics: "You were something special when you said, John, that you had more disciples than the man who was too green." I was surprised that hear that the incident was reduced to such a throwaway line but I guess the writers found genitals more offensive than blasphemy. Overall, the song feels a bit hokey and strangely prudish but it's definitely an interesting look into the social values some people held in the late '60s.

I'll definitely be revisiting Beatles novelty songs in the future but for now I'd like to say thanks for reading the blog and be sure to listen over the air on KUCR 88.3FM on Saturdays at 9pm or through KUCR.org! If you'd like, you can also listen to KUCR through Radio Garden or Tune-In.

Also, I'd like to give a special shout-out to the O.H. (original hippie) Hippie Harmonica Hal. Hal wrote in to share his appreciation of college radio and it really made my day. Thanks for the kind words, Hal!

On this episode of Hippie Love Turbo, on KUCR 88.3 FM you heard a real groover by Del Shannon titled Move It Over. The song has a similar feel to Ray Charles's What I'd Say and Sir Douglas Quintet's She's About a Mover, so be sure to check it out if you dig those songs. 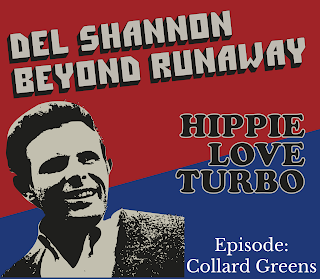 Although most people know Shannon from his song Runaway, he had a fairly expansive discography which ranged from country to sunshine pop and soft rock. If you feel like taking a deep dive into Shannon's work, I suggest listening to his dreamy pop album Home and Away which flirts with psychedelia and sounds completely at odds with much of his earlier output. The story goes that Shannon was on tour in the UK when he met Andrew Loog Oldham, a producer that most famously worked with The Rolling Stones. Oldham had heard Shannon's cover of The Rolling Stone's Under My Thumb and liked it so much that he asked to produce an album for Shannon. A few singles from the session were released to disappointing sells figures, leading to the album being shelved for quite some time. One of the strangest, but most interesting, tracks on the album is a re-imagining of Shannon's top hit Runaway, this time titled Runaway '67.

If you'd like to continue your Del Shannon exploration, I'd suggest you also listen to Shannon's 1981 album Drop Down and Get Me which was produced by Tom Petty and features Petty's backing band The Heartbreakers. If you are a fan of Petty's, this album is especially worth listening to because many of the tracks sound like outtakes from Tom Petty and The Heartbreaker's own album Damn the Torpedoes, especially the title track Drop Down and Get Me and, another Rolling Stones cover, Out of Time.

Shannon worked with Petty and The Heartbreakers again on his album Rock On! which features songs that I'd argue are written better than Drop Down but suffer from worse production values. Imagine Roy Orbison's 1989 album Mystery Girl but with worse sounding gated and compressed 80s drums. A particularly bad example is the opening track Walk Away where the drums sound like they were lifted straight from a Casio keyboard. Perhaps one day someone might be able to tweak the album and make it more palatable to modern ears but I doubt it.

Anywho, before I finish this post, I'd like to quickly suggest you check out the punk compilation Let Them Eat Jellybeans which features songs by DOA, Dead Kennedys, and Flipper. I briefly mentioned the compilation after you heard The Jelly Bean Bandits play their song Tapestries. The compilation has been out of print for some time now and features an alternative version of Black Flag's Police Story as well as some other rarely heard treats!