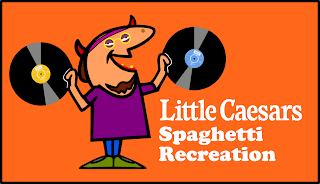 Back in 1992 Little Caesars was falling slightly behind the other major pizza chain titans Pizza Hut and Domino's Pizza. According to Nation's Restaurant News' 1992 reports, Pizza Hut reigned supreme with a 27.8% share of the market, trailed by Domino's 14.8%, and Little Caesars' 13.5%. At the time, Caesars was targeting customers by creating larger budget friendly pizzas and side dish options forcing the other chains to compete by releasing their own oversized pizzas and by ramping up delivery speeds. During this greasy wild west like time, Little Caesars differentiated themselves by adding an unusual option to their menu: spaghetti in a bucket. The buckets came in three differently sized options including the largest one which was named "Big! Big! Bucket," a name that was reminiscent of their extra-large "Big! Big! Pizza." The spaghetti sauce was packaged separately and according to the Little Caesars' spokeswoman at the time, Sue Sherbow, the sauce was different from the sauce that was used for their pizza.

As of late there's been some hoopla over Little Caesar's sauce due to a series of viral videos "exposing" how it's made in the store. Back in 1993, customers were also sensitive towards the industrialized way food is made which is why it was important for Little Caesars to let customers know that they weren't just dumping old pizza sauce into their spaghetti. Realistically, customers should understand that fast-food and similar casual dining restaurants keep costs down by lowering waste, simplifying their menu, and streamlining preparation time. If you analyze any fast-food menu, you'll see that a lot of items share the same ingredients with only slight tweaks to make each item unique. In fact, I remember some years ago there was a Wendy's training video that went viral and most commenters focused on how the meat in Wendy's chili was made from burger patties that fell apart while cooking. The lines in particular that caught people's attention were:

"Never serve a burger that's looking ratty but if something goes wrong and your burger’s not right, there’s no need to get uptight. If the dry burg is broken or incomplete, that baby turns into chili meat."

Then again, maybe referring to ground beef as "ratty" or a "baby" had something to do with the repulsion.

For my little experiment I ordered a "Crazy Combo" (one sauce and one order of "Crazy bread") with an additional six orders of "Crazy Sauce." Perhaps I could have ordered the sauce alone but with my endless social awkwardness I decided it made more sense to order the sauce with the bread because, who doesn't use a whole container of marinara sauce per bread stick?

As for the noodles I used Private Selection Italian Bucatini which is just a generic pasta from my local grocery store. The noodles plump up quite a bit during the cooking process which made them extremely filling. Was it accurate to the noodles used in Little Caesars's buckets? Doubtful, but in the end none of this really makes sense.

I boiled the noodles as you'd normal cook them, however, I decided not to add salt to the water because I assumed that the sauce would be salty enough on its own, which ultimately ended up being true. The noodles were left boiling for about ten minutes and were removed while they were still slightly al dente. I'm not sure how the noodles were made at Little Caesars but I'm assuming they were made in batches that were then placed inside a sort of electric chafing dish, much like you'd find at a buffet.

Finally, I strained the noodles and added the sauce which, for me at least, wasn't quite enough. I have no reference for how much sauce would have been provided in a typical spaghetti bucket but, if for whatever reason you chose to recreate this dish, a 16 oz package of pasta might need more than 6-7 "Crazy" sauce containers. I'm not sure if the Little Caesars spaghetti buckets contained meat or not but it's possible that some sort of "meatballs" could've also rounded out the taste.

Overall, the taste wasn't bad at all. It was a little sweeter than the average can or jar of marinara sauce that you'd get at a grocery store but I wouldn't say that it was vastly different. If I had used another container or two of "Crazy Sauce" I may have enjoyed it more but then again, I doubt Little Caesars would've provided the gallon of spaghetti sauce which I normally prefer. I do have to say, I think the quality of the noodles helped out more than anything. I liked the pasta's larger size, which although most likely not accurate to the original spaghetti bucket, helped make a hearty meal which I believe was the bucket's intended goal.

Ultimately, it was an okay meal. Not great in any sense but it wasn't disgusting either which I assume was the average response towards the original "Big! Big! Spaghetti Bucket." When you think of budget pizza places, your mind can only go so far with the side dishes, and perhaps since spaghetti is more of a main dish and the cooking process involves boiling water, customers were immediately turned off. There are many ways to mess up spaghetti and it's not hard to imagine your order coming with under or overcooked noodles served with lukewarm pizza sauce in packaging that's akin to a mop bucket.

I don't really suggest trying this out on your own but there are recipes out there that claim to come close to the taste of "Crazy Sauce" if you don't feel comfortable ordering a ton of sauce during your next trip to Little Caesars. If you do try it out let me know what you think and I'd also love to hear from people that tried the spaghetti buckets from Little Caesars when they were still available. Stay saucy!