This Sunday at midnight on KUCR 88.3 FM is the Hippie Love Turbo Halloween Special! Be sure to listen over the air on KUCR 88.3FM or through KUCR.org. If you'd like, you can also listen to KUCR through Radio Garden or Tune-In. 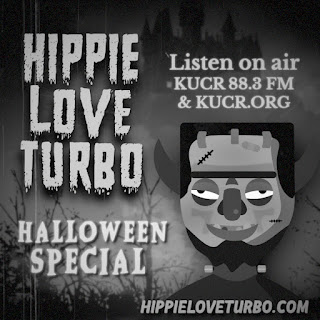 Just like last year's Halloween Special, I kept the talking to a minimum so we can all just enjoy the creepy tunes, however, that's not to say I didn't speak just a little.

Later in the episode there's a rare song by The Daringers called The Morgus Creep and, Although the band was around for a few years, The Daringers only recorded one single which happened to be with a television horror host, Morgus the Magnificent. The band remained fairly unknown throughout the years until another blogger and radio host named Hunter King spoke with The Daringers' drummer. A couple years after the single's release Morgus starred in a somewhat obscure full length movie named The Wacky World of Dr Morgus.

And finally, towards the halfway point of the show I spoke about the Winchester Mystery House which is located in San Jose, California. The house is known for its unusual architecture which includes a door to nowhere, staircases that lead to dead ends, and various other peculiarities. The myth goes that the house was built to confuse ghosts and spirits that haunted the estate's owner, Sarah Winchester. Mrs.Winchester's husband, William Winchester, was the man behind some of the most popular rifles ever produced and Sarah was supposedly convinced that the spirits of those that were killed by Winchester's rifles would haunt her if she didn't expand and renovate her mansion. Much of the house's history has been embellished over the years so sometimes it's hard to separate the facts from the fiction. Regardless, many have claimed that they've seen apparitions at the mansion and such stories, along with various works of fiction, have added to the home's mystique.

Thanks for tuning in this week! You can check out this episode's playlist below:

The Bells Of Rhymny - The Wicked Old Witch

And below are the songs used as backing tracks during the speaking bits:

On this episode of Hippie Love Turbo, on KUCR 88.3 FM I mentioned an experiment that my elementary school teacher performed with us in 2nd grade that involved Crisco and ice water. During the experiment the class took turns placing our hands in some ice water to see how long we could handle it. After the students agreed that it uncomfortably cold (duh) our teacher brought out a bag full of Crisco, with another bag acting as a glove, and we tried the experiment again. This time around the Crisco, which served as an analog to blubber, made the ice more bearable. Eventually, our teacher turned the experiment into a competition to see who could hold their hand in the water longer, a Crisco gloved student or someone that was bare handed. Of course, the teacher chose a headstrong show-off as the bare handed participant and he held his hand in the water until it turned blue. Even as a kid I realized that it was a bad idea on my teacher's part but ultimately, I recognize the power of the experiment because I still remember it to this day. In fact, the experiment must have been a hit for many people as I see the lesson is still suggested, in various forms, to this day and more than likely, it was performed well before my time too.

Recently, the experiment was brought back from the dusty shelves of my mind when I listened to George Washington and The Cherrybombs song Crisco Party. What's a Crisco party? It's a sort of slippery dance party where everyone coats their bodies in what's essentially shortening made from vegetable oil.

Well, all you need is a lot of Crisco and some girls and boys.
Well, when you get to that party throw your hands up for joy.
I like Crisco Party. He likes Crisco party. Everybody grease up now.

If I put my tin foil hat on for a second, it almost seems like the song was a sort of sly advertisement for the brand. In fact, Crisco was famous for its aggressive ad campaigns which cost hundreds of thousands of dollars in between 1911-1915 and included cookbooks which were given away for free and listed Crisco as an essential ingredient. Even before that, Crisco was known for encouraging people to trust the brand and not worry about which ingredients were included in the product. Hmmmm. Suspicious. Then again, sometimes you just write about what you like, even if it can be construed as free advertising.

Changing topics from Crisco now, I had mentioned in the show that there isn't a ton of info on one of the bands I played named The White Nights besides that they come from Regina, Saskatchewan and that they recorded a couple singles on Gaiety Records. While doing some research I found out that early on the band had a gimmick where they wore all white and even had their hair bleached white as well. Gimmicks weren't uncommon in rock music back then but they feel so quaint compared to some of the stuff we see today. Anywho, I talked about how the existing pictures of the band were neat so I've included them above. Enjoy.

On this episode of Hippie Love Turbo, on KUCR 88.3 FM you heard Daybreakers play their song Psychedelic Siren and I spoke a little bit about their hometown Muscatine, Iowa. Located in Eastern Central Iowa, the city was formerly known for its busy river port on the mighty Mississippi River. Although the port isn't as busy today, there are still plenty of things to check out in Muscatine. One such attraction is the Muscatine Art Center, which is located in the former Musser Mansion and serves as both a local history museum and a place for artistic expression. One of the highlights of the museum is The Mississippi River Collection which contains various artworks related to the history of the Mississippi River. The museum also appears to have a rotating collection of more modern works pertaining to the environmental and social issues of the area.

However, when it comes to musical exports, Muscatine is known as the hometown of Scot Halpin, a man that was famously pulled from the audience during a performance by The Who after drummer Keith Moon passed out on stage. The circumstances leading to the situation almost sound like an unlikely work of fiction. Our hero in this story, Scot, was visiting a friend in California when he heard that The Who's first concert in the US was going to be at the nearby Cow Palace in Daly City. Because Scot's buddy only had one ticket to the concert the pair had to show up early and find someone willing to scalp a ticket. After the pair procured a ticket, they made their way to the front of the stage where they eventually noticed a distraught and disorderly Keith Moon losing consciousness multiple times. Scot's pal pushed Scot to the side stage where he was spotted by promoter Bill Graham.

"Graham looked straight at me and said, ’Can you play?’ Next thing I knew Bill Graham took me backstage and turned me over to the drum roadie who sort of prepped me as to the drum setup."

Serendipity at its finest!

You can read more about the incident, along with Scot's recollections, on the Drum Magazine website and there happens to be a video of the event as well. The craziest part of the whole story is that Halpin considered himself more of a stringed instrument guy than a drummer yet he was able to perform on stage in front of a large crowd with zero preparation. Wild stuff.

On this episode of Hippie Love Turbo, on KUCR 88.3 FM I didn't have much to talk about because most of the bands I played on this episode were fairly obscure. When you start to dive into the history of a lot of these bands, especially if you've pulled the tracks from various compilations, you begin to see patterns. Sometimes they only released one single or the "band" was actually just a bunch of studio musicians, for some reason the musicians worked under a pseudonym or maybe their name was so generic they got lost among all the other generically named bands, or they were simply a regional group that self-released and didn't get any national recognition. Regardless, a lot of these artists either don't really care anymore about a small band from their teens, they have no real presence on the internet, or frankly, they've died. Such is life.

However, that's not to say everything I played on this episode was obscure. For example, you heard a song by The Critters and they had a few top hits during the late '60s including their most famous song Mr. Dieingly Sad. Later on, we ended the episode with The Jarmels' hit A Little Bit of Soap which was so popular that several cover versions also charted well. Garnet Mimms' version peaked at #95 on the Billboard charts, Paul Davis reached #52, and Nigel Olsson broke the top ten at #9. Of course, the version which most appeals to me the most is Daniel Johnston's Lo-Fi take on his album Respect.

But if we're talking about popularity, you can't get much more popular than The Flintstones were in 1965. On episode 16 of season 6, Shinrock-A-Go-Go, you might recognize a tune by The Beau Brummels... (or should I say The Beau Brummelstones) Laugh Laugh. An animated version of the band plays the song several times on a parody version of the musical variety show Shindig! named Shinrock.

The episode's main story line revolves around Fred Flintstone inadvertently creating several popular dance crazes including the "Flintstone Flop". However, what's most interesting about the episode is the lighthearted parodies of rock and roll tropes and the popular teen culture of the time with Shinrock's host, Jimmy O'Neillstone, who was voiced by the actual host of Shindig!, Jimmy O'Neill (clever?). The episode is worth checking out if you are a fan of music variety shows from that time period and as of writing this you can find the episode streaming for free on Tubi. Just watch out for Jimmy O'Neillstone's bizarre face which is too realistic for the Flintstones' aesthetic.

This episode's playlist can be found below: