On this episode of Hippie Love Turbo Radio Show, on KUCR 88.3 FM, I decided to keep my rambling brief again but there were a few things that I blabbed about (as is expected). Firstly, I played a song by Bobo Jenkins titled Nothing But Love and I mentioned that he is also known for his song Democrat Blues which was written on Election Day in 1952. Bobo had some reservations about Eisenhower because he felt anxiety towards how Republicans handled the Great Depression. 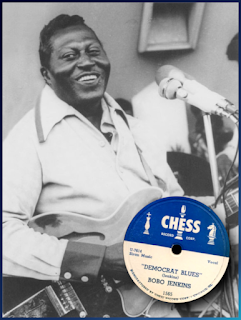 After talking about Bobo Jenkins I mentioned how Ann Brewer and The Flames were inducted into the Kansas Music Hall of Fame back in 2008. Never heard of the Kansas Music Hall of Fame? Well, the music hall is in Beloit, Kansas which is a small town with a population that hovers just below 4,000 and there is a lovely little video that documents the induction here. I'm not to sure about the title of their song that I played which is labeled Rockin' In A Wooden Sack in just about every version I could locate, however, it makes more sense that it would be Rockin' In A Wooden Shack. Who knows?

And quickly we'll go through some other topics I covered on this week's show. You heard some Shocking Blue on the episode and I talked about their most famous song Venus. I know you've heard the song either from the shaver commercial or Bananarama's cover but have you seen their respective music videos? Both are somewhat humorous with Shocking Blue looking stiff and confused while Bananarama are extremely confident in their bizarre video featuring fire, vampires (?), the devil, and some awkward dancing. Whenever I talk about Bananarama, which isn't very often, I mention the song that plays during the credits of the 1986 horror film Killer Party. It's obviously influenced by Bananarama's Cruel Summer and it doesn't really fit the tone of the film's ending but it sure is catchy.

Towards the end of the show you heard The Shags play Don't Press Your Luck but have you ever heard of The Shaggs? If you dig music that is unusual but earnest you have to check out their only release Philosophy of The World. While you check out The Shaggs you should also add Thee Oh Sees' cover of  The Creation's If I Stay Too Long to your queue. You heard the original as the second to the last song on this week's episode.

Whew, now that that's over you can check out this week's playlist below:

The Reasons Why - Don't Be That Way

Tides In - Trip With Me