There was one year where no matter where I went these walking Santa toys kept popping up. There are a ton of minor variations between each model but they all seem to have come from the same factory in Taiwan. All of the Robo-Santas that I found were versions that walked, rang a bell, and played a few songs. Here's a video made by Meoki which shows one in action.

However, either due to the age, the terrible quality of the plastic internals, or a mix of the two, the toys seem to be extremely fragile. Because of my bad impulse buying habits I grabbed a few of them and only one of them seems to work. Sort of. It mainly just whirs and grinds away at its plastic gears. If you happen to open one up you'll most likely see that the plastic gears are cracked or broken in some way. One of my Santas actually plays music but the volume is unusually loud and there is no way to turn it down. My guess would be that the manufacturer wanted to insure that you'd hear the music over the whining motor and tiny bell. 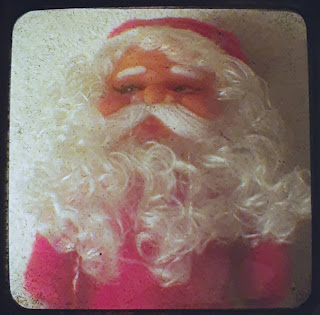 There isn't really any branding on the robot Santas that I have besides this weird little "B" logo that can be found on the bottom of one of the toy's feet. I'd bet the logo doesn't actually represent any company but rather was made up in order to give the toy some sort of legitimacy. It's all a big mystery to me. Not necessarily a mystery worth solving but a mystery nonetheless.

All of that being said, I was putting up some Christmas decorations when I unpacked one of the boxes that had the Robo-Santas. Inside that box I found another box containing the packaging which held ACTION SANTA! I'm not exactly sure why but I really enjoy the aesthetics of generic commercial art.  Maybe it's the same thing that attracts people to Naïve art. Anyway, I like the box so much that I thought it'd look nice as an ornament so I created a little papercraft template. All the images on the template were scanned directly from ACTION SANTA's box, including the price tag from the thrift store that I bought it at. I didn't add holes for an ornament hanger but I think that it'd be easy enough to figure something out. Plus, you might just want to have it sit on your desk or something. Because the tolerances are pretty tight you can probably get away with only having to glue or tape one side if you are printing the template on card stock. Let me know if you try it out! I'd love to see some pictures of your creations. 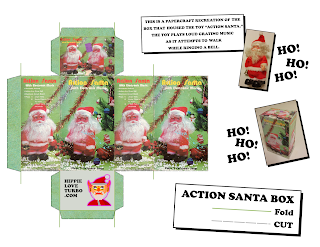