On this week's Hippie Love Turbo Radio Show, on KUCR 88.3 FM, I played a bunch of cover songs so I thought it'd be neat to post the originals or the versions that most people are familiar with. Bands and artists still cover other artists' works, but it's rare that the songs that modern artists cover are contemporaneous. What I mean by that is, there are a ton of cover versions of songs from the 60s that came out the same exact year as the originals. I don't see that happen very often anymore and when I racked my brain thinking of more modern examples the only one that came to mind is Tame Impala's New Person, Same Old Mistakes and Rihanna's version which uses the same backing track. Both tracks came out less than a year apart.

Of course, back in the day artists didn't really share the same backing track but instead they typically recorded their own version. For example, I played The Electric Prunes' version of Ain't It Hard but the original by Gypsy Trips came out just a year before and supposedly both bands recorded in Skyhill Studios. Listening to both songs, however, you can tell The Electric Prunes put their own spin on the song. Another example that I played was Cosmo and The Carnations' version of I'm A Little Mixed Up which came out the same year as the superior original by Betty James. During the show you also heard Les Belges preform a French language version of The Hollies Have You Ever Loved Somebody? and both versions came out in 1967. Finally, I played Dick Rivers' C'est Ma Vie which is a cover of It's My Life which was made famous by The Animals. Not only did those two songs come out in 1965 but they were both released only a couple months apart! Wild stuff.

And now, let's get into this week's trash film recommendation: The Driller Killer! It's a slasher film where the killer's weapon of choice is a corded drill. The movie really leans into the absurdity his weapon as the killer powers it by wearing a giant and cumbersome battery belt that he discovers through a commercial on late night TV. 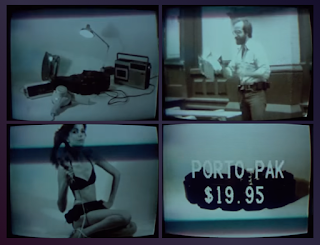 However, unlike most slasher films the main protagonist is the killer. You follow the disturbed young man, Reno, as he delves deeper into his psyche and begins a killing spree fueled by his stressful home life and fears of becoming a derelict like his estranged father. While much has been said about the film's gore and violence, what I think makes this film stand out is the setting. You get a feel for that late 70s New York hustle and street life. Everyone in the film is skeezy, drugged out, or gritty in some way or another. As much as the film is about the killer Reno, it's also really about artists and musicians living on life's fringes. My favorite thing about the movie is the film's resident No Wave/Punk band Tony Coca Cola and the Roosters. They constantly play music and flirt with success as Reno struggles to make rent by selling his oversized paintings. You really get a feel for Reno's frustration with having to deal with a bunch of loud neighbors that no one else seems to mind.

The Driller Killer would be worth a watch even if there was no serial murder due to the amazing setting that serves as a snapshot to a time that's often forgotten. Then again, maybe I've been warping my brain by watching too many of these movies. Yikes!

Anywho, this week's playlist can be found below:

Nazz - Lay Down And Die, Goodbye