On this week's Hippie Love Turbo Radio Show, on KUCR 88.3 FM, there were some Tennessee connections as you heard, Johnny Burnette (born in Memphis, TN), Hayden Thompson (moved to Memphis and cut some records at Sun Studios), and Carl Mann (born in Huntingdon, TN and signed to Sun Records). Something that really caught my attention during my research was Carl Mann's hometown of Huntingdon, TN. The small town has a preforming arts center named after Dixie Carter, an actress best known for her role as Julia Sugarbaker on Designing Woman. As critics look back at Designing Woman they recognize the progressive views embedded in the show, especially season 3's 2nd episode entitled: "The Candidate." During the episode Julia Sugarbaker debates a commissioner that embraces prayer in school and believes in removing homeless shelters to, "return the streets back to people that pay for them."

At the episode's climax, Ms. Sugarbaker has a powerful monologue where she critiques the commissioner's talking points while her friends and colleagues watch on. What's particularly interesting about Ms. Sugarbaker's monologue is that it didn't necessarily align with Dixie Carter's own personal views being that Dixie Carter viewed herself as a Libertarian leaning conservative. Of course, we shouldn't expect actors to share all of the personal beliefs held by the fictional characters that they depict, but in today's political climate it almost seems refreshing that someone could separate their personal beliefs from the roles they portray. Then again, I doubt anyone believes Charlize Theron and Megyn Kelly share similar political views just because Theron played Kelly in 2019's Bombshell.

Speaking of movies, let's look at this episode's creepy film suggestion: Tombs of The Blind Dead! The film features a bunch of spooky scary skeletons that rise from the grave to attack the living because... that's just what zombie/revenants do. The Blind Dead are re-animated corpses of old Knights of The Templar and the film opens with a flashback to the Knight's torturing a woman for unknown reasons. I guess they've always been into the whole torture and cannibalism thing. The plot is fairly confusing or, for better words, lacking but that's not really what you'd watch this movie for. Movies like this are more about the atmosphere and eeriness. 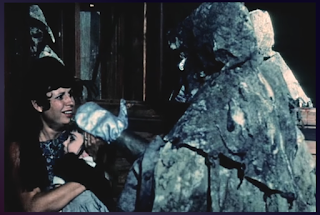 In fact, I could have sworn that, towards the end of the film, even one of the extras looked like she was holding back a smirk as she was attacked by one of the Blind Dead's silver oven mitts. I could over analyze the effects all day but in reality I think the film features enough entertaining spookiness to keep you watching for 90 minutes. However, I'm not sure if I could watch the other THREE films in the Blind Dead series but, then again, who am I kidding? I probably will.

This week's playlist can be found below:

Nazz - Lay Down And Die, Goodbye