You heard some gas guzzling hot rods, drippy guitars, far out 2-strokes, and swinging back-beats on this special automotive inspired episode of Hippie Love Turbo, on KUCR 88.3 FM! Most of the songs I played on the show would normally fall into the surf rock category but with some slight lyrical tweaks and engine sound effects...BOOM! You've got yourself a new subgenre. 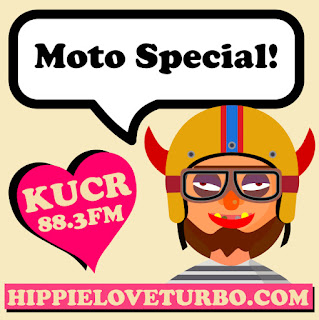 In the spirit of the Moto Special, we're going to look at two fun examples of 60s car culture that are semi-related to the garage rock scene (at least that's what I'm telling myself). Firstly, if you like custom cars and cool guitars you should check out the Voxmobile made by George Barris in 1967. Barris was best known for his work on television vehicles including the original Batmobile from the 60s Batman and The Munster's Koach but he also worked on promotional vehicles for various companies including the musical equipment brand Vox.

The first thing you'll notice when looking Barris' Voxmobile is that both sides feature oversized Vox Phantom IV basses, however, what's not immediately obvious is that the car actually features Vox Beatle amplifier heads and speakers in the rear which can be used as a sound source for a live band. The car was featured on the cover of Jimmy Bryant's album The Fastest Guitar in the Country and there are various promotional material featuring the vehicle and artists that used Vox gear such as Eric Burdon and The Animals. If you are interested in reading more about the Voxmobile there's a cool article by Dave Hunter on the Vintage Guitar website.

The next car is a yellow eye catcher by Ratfink creator Ed "Big Daddy" Roth named The Surfite.  Created 1964 the car is one of Roth's more obscure creations that managed to find its way into several musical comedies including Beach Blanket Bingo and Village of The Giants, the latter of which can be seen on an episode of the hilarious TV show Mystery Science Theater 3000. Unfortunately for all you Roth lovers out there, all of The Surfite's movie appearances are fairly brief and blurry.

The car is an asymmetrical single-seater that features a cutout section which fits a medium sized surfboard that's painted to match the vehicle. Although we all can't cruise around in our very own Surfites we can settle for the Revell model kit which is still available today.

You can listen to this episode's wild burnt rubber playlist below: