On this episode of Hippie Love Turbo, on KUCR 88.3 FM we started the show with a song by Soulbenders titled I Can't Believe in Love and I mentioned that the group was from the second largest city in Michigan, Grand Rapids. 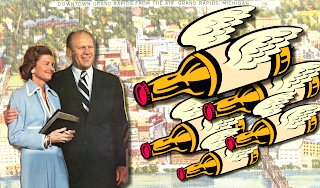 USA Today has said that Grand Rapids is one of the best beer towns in the U.S. but before you hit the bars during your next trip into the city you should stop by the Gerald R. Ford Presidential Library and Museum where you can see such artifacts as: Ford's football collection, Betty Ford's dress collection, and the Colt 1911 that Manson follower Lynette "Squeaky" Fromme used when she attempted to assassinate Ford. 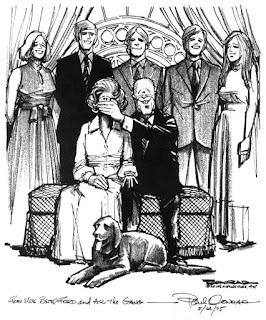 Another item among the museums collection is a political cartoon by Paul Conrad which depicts the Ford family with President Ford covering the first lady's mouth. Mrs. Ford was known for her outspoken socially moderate/liberal views which were seen as detrimental to Ford's presidency and re-election bid. Our modern political climate makes it difficult to imagine that there was a time when Republicans could publicly call themselves feminists or express pro-abortion views but Betty Ford often placed herself in the forefront of many women's issues. In contrast, former first lady Laura Bush waited until her husband left office until she expressed her views on abortion and other social issues on Larry King Live.

As a historical local aside, after Ford's presidency ended the Fords relocated to the Thunderbird Country Club in Rancho Mirage where they resided until their deaths. Both the president and first lady were then buried on the grounds of the Ford Presidential Library.

Later in the episode you heard a song from the fairly obscure band from Amarillo, TX, The Notations which led to a discussion about the city's many public art attractions such as the Second Amendment Cowboy (which ironically appears to be weaponless), the Helium Time Columns Monument, Ozymandias of Amarillo, and most famously the Cadillac Ranch.

Cadillac Ranch was the brainchild of members of the Ant Farm art group: Chip Lord, Hudson Marquez and Doug Michels. I first heard about Ant Farm when I stumbled upon a video on Archive.org featuring their performance art piece, Media Burn, which features members of the collective driving a customized Cadillac through a pyramid of flaming television sets. I could go on and on about Ant Farm but I'll leave that for another day. The Museum of Contemporary Art produced a short documentary about Media Burn which explores the concept and execution of the event.

You can check out the songs played during this episode below: