This episode of Hippie Love Turbo, on KUCR 88.3 FM featured a bunch of bands that aren't on Spotify so I had to dig a little deeper than usual to provide a playlist but luckily there are plenty of fine people on YouTube that are willing to share some of their collections. 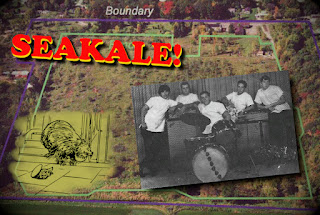 Towards the beginning of the show, you heard The Dirt Merchants perform their song Do What You Wanta Do which appears as a B-side on their only release from 1966. The A-side is a song named I Found Another Girl which shares a lot of similarities to The Nightcrawlers' song The Little Black Egg. And by saying it shares a lot of similarities I mean, it's practically the same song, even down to the basslines with the differences coming from the lyrics and the chords used in the refrain. Perhaps someone was banking on the popularity of The Little Black Egg to rub off on The Dirt Merchants single, however, I would argue that the B-side is the stronger song of the two and would have made a better A-side. Unfortunately, both of the songs suffer from fairly generic lyrics along the lines of the typical "you did me wrong" song. If you are having a little déjà vu it might be because I recently wrote about The Little Black Egg on the episode Mizuna.

There were at least two different bands with The Dirt Merchants name and because there's little information on either band, it's easy to get them mixed up. The Dirt Merchants from this post appear to have been from Yazoo City, MS and featured Jack Phillips, Ricky Pettigrew (mislabeled R. Pettigraw on the single), John Brister, Kenny Waldop, and Charles Jackson. Jack Phillips, the singer of The Dirt Merchants (MS), continued to play music in various groups over the years with his most recent band being The Remnants until his passing on May 3, 2021.

More information can be gleamed from the comment section of a Garage Hangover blog post about the Florida based Dirt Merchants. A commenter that identifies himself as Ricky Pettigrew's son states that The Dirt Merchants (MS) won a Battle of the Bands in New Orleans which awarded them a recording session at what he believes to have been Bradley's Barn. This is mostly likely how the band recorded their only single since it appears that they never had a record contract. Besides that, I haven't been able to find any other information on the group.

The name Bradley's Barn may be familiar to you because it's also the title of The Beau Brummels' fifth album which takes its name from the studio. It's a bit different from the band's earlier releases but it's worth listening to if you want to hear early releases in the country rock genre. There were a ton of great albums recorded at Bradley's Barn before it burned down in 1982 due to a florescent light's faulty electrical connection. Unfortunately many irreplaceable masters were completely destroyed in the fire. Eventually, I'd like the dive deeper into the history of Bradley's Barn, however, until then you can check out the Barn's official Facebook page.

Now I'll quickly go over some of the other topics I covered on this episode!

Following The Dirt Merchants, you heard a track by The Satans named Makin' Deals. There's a post on a blog named On The Flip-Side that makes a pretty solid argument that the group was probably just another studio project and that The Satans probably never existed in the true sense of a band. On The Flip-Side also makes a connection to biker exploitation soundtracks and points out how the B-side, Lines And Squares, swipes lyrics from an A.A. Milne poem with the same name. The poem features "satanic" lines such as:

The sillies who tread on the lines of the street
Go back to their lairs,
And I say to them, "Bears,
Just look how I'm walking in all the squares!"

Later in the show you heard The Interns track I've Got Something To Say and I spoke a little about how the single suffered from mistakes during its production. Additionally, I touched on a little history of the band's hometown Uniontown, OH that's just outside of Akron, OH and is known for its proximity to a Superfund site.

That's about it for this episode! Be sure to listen over the air on KUCR 88.3FM on Saturdays at 9pm PST. You can also listen through KUCR.org, Radio Garden, or Tune-In.

You can check out this episode's playlist below:

The Catsanovas - I Want To Be Loved
The Dirt Merchants - Do What You Wanta Do
Half Pint And The Fifths - Orphan Boy
The Interns - I've Got Something To Say
The Madd, Inc. - I'll Be The One
Freedom Five - To Save My Soul
The Troyes - Rainbow Chaser
The Casuals Incorporated - I Realize
The Nite Watchmen - I'm Gonna Lose My Mind