On this episode of Hippie Love Turbo, on KUCR 88.3 FM you heard a fuzzy and somewhat moody banger by an unusual artist that went by the name Paul Martin. During the 1960s Martin released two singles, one through the Philadelphia based Impex Records and the other via his own label Rodin Records. In the 90s the singles were combined with a series of unreleased demos to make up a self-titled album released by Distortions Records and in 2016, the recordings were remastered and compiled again, this time adding an additional unreleased track, The Children. These versions were released on an album titled It Happened by Out-Sider Records.

If you are interested in buying either the Distortions or Out-Sider releases I'd say there isn't much of a difference between the two but, Out-Sider's definitely has the better liner notes and is more accessible nowadays. To me, the most interesting tracks on either release are the more garage rock type songs but there aren't many. Most of Martin's songs are less appealing jangley affairs that, while worthy of a listen, probably won't stand out too much to most people. I found myself skipping a few tracks that include horn sections, but maybe that's just me. Horn sections are by far my least favorite thing about 60s rock and are the reason I often find myself ignoring a lot of music that's categorized as Sunshine Pop. Curiously, each release omits the B-side to Martin's first release I Can't Stay Here Anymore which I haven't been able to find anywhere online. If I were to guess why the track has seemingly disappeared, I'd probably say the track was left out for royalty reasons.

And now I'll quickly sum up some of the other topics I covered during this episode.

Towards the middle of the show, you heard The Zettlers' Skinnie Minnie, which is a cover Bill Haley and The Comets' Skinny Minnie. On The Zettler's initial release, the song was incorrectly attributed to the writers of Teresa Brewer's Skinnie Minnie, which is a novelty song about a fisherman that fishes too much as he searches for a mermaid. There have been a ton of covers of Skinny Minnie over the years but some of my personal favorites are by The Sonics, The Mummies, and Gerry and the Pacemakers.

After that, you heard a song by The Wrench titled The Day Is Hard which reminded me of a video by the YouTuber Hand Tool Rescue in which he recreates an unusual wrench that was made for tightening down cone shaped fasteners. Hand Tool Rescue's process of recreating the tool is as interesting as the tool itself which, according to the video's creator, was most-likely was never made to begin with. If you like DIY or hobby machining you'll probably dig this video. 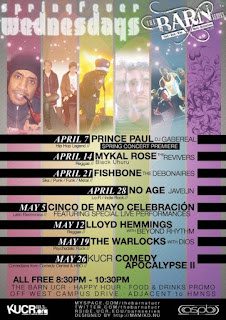 And finally, you heard The Four of Us perform their song Baby Blue which I mentioned was the title of a song by another group named The Warlocks. If you like early 2000s neo-psych than you probably already know The Warlocks but if you don't I'd highly suggest you start with their 2003 release Phoenix which features some of their best work including: Hurricane Heart Attack and The Dope Feels Good. Back in 2010 they played here in Riverside at The Barn and they put on quite the show.

And that's it for this episode! Thanks for reading the blog and be sure to listen over the air on KUCR 88.3FM on Saturdays at 9pm, or on Mondays at 10pm PST. You can also listen through KUCR.org, Radio Garden, or Tune-In.