On this episode of Hippie Love Turbo, on KUCR 88.3 FM you heard a fun, mostly instrumental, song by The Jesters named after the Seattle neighborhood Alki Point. While talking about the song I mispronounced Alki Point as Al-key rather than Al-kai (pronounced like the ki in kite) and, ironically, towards the end of the show you heard a song by Marc Bolan (lead singer/songwriter for T.Rex) and I mentioned that there is a scene in the 2017 film Baby Driver where the lead character is embarrassed by his love interest, Debora, when she corrects his mispronunciation of T.Rex as Trex. Oh well. Wouldn't be the first time I didn't say something correctly and certainly won't be the last!

Anywho, Alki Point is a lovely peninsula in Seattle that is known for its coastal views that include both downtown Seattle and the Olympic Mountains. When most people think of Alki Point they are thinking about Alki Beach where tourists like to gather during the warmest months, which there aren't many. The beach has served as a backdrop for small to mid-sized concerts over the years such as Sub Pop’s 30th Anniversary Party in 2018.

Continuing along the coast of Alki Point are the expected eateries, a handful of small parks, as well as, a few landmarks including: the Alki Point Lighthouse and 8 and a half foot-high copy of the Statue of Liberty which was donated to the neighborhood as part of the Boy Scouts 1950 campaign themed Strengthen The Arm of Liberty. Although 200 replicas were distributed to various cities across the US, many have been removed or replaced over the years. In fact, the statue that sits in Alki Point is a copy of the original which had to be replaced due to damage caused by the natural aging process and vandalism. Appropriately, Alki Point was settled and partially founded by a New Yorker named Lee Terry and who had originally named the settlement "New York Alki." 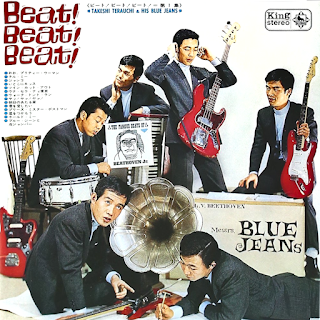 Towards the middle of the show, you heard another instrumental song, this time by Takeshi Terauchi and The Blue Jeans. Takeshi, aka Terry, was in several groups over the years with his Ventures style guitar work being the main focus. If you dig The Ventures you'll like Terauchi's early work with The Blue Jeans, especially the 3 volumes of Beat! Beat! Beat! which includes a couple far out covers such as: The House of The Rising Sun and Please Mr. Postman. If you aren't a fan of overly polished studio work from the 80's I'd say you should avoid their 25th anniversary album although, as I discussed in a previous episode, that kind of sound can have its own charming aesthetics.