This episode of Hippie Love Turbo, on KUCR 88.3 FM was based on everyone's favorite essential aspect of life... FOOD! Yes, every song you heard on this episode was based on, or related to food, even the background songs. 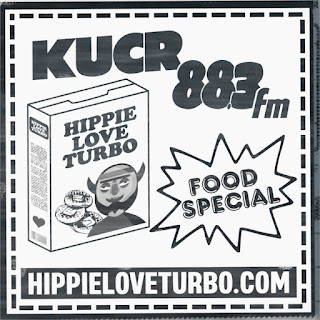 I didn't speak too much on this episode but I did mention a few things about potatoes (then again, when am I NOT talking about potatoes).

Did you know that Americans eat over 115 pounds of potatoes a year with most of those potatoes enjoyed as French fries and potato chips? Speaking of French fries, there are arguments about whether or not France or Belgium can claim to be the origin of the salty side dish which is ironic because at one time France actually banned potatoes over fears that the vegetable could cause leprosy.

One of my favorite ways to prepare potatoes is by mashing them but mashed potatoes are actually a younger dish than I had imagined. The timeless classic was first documented in the 18th-century by an English writer named Hannah Glasse in her book: The Virginia Housewife: Or Methodical Cook. If you aren't accustomed to reading old recipes you'll notice how simple Glasse's directions are compared to the sorts of modern recipes you may be used to:

When the potatoes are thoroughly boiled, drain and dry them perfectly, pick out every speck, and rub them through a colander into a clean stew-pan; to a pound of potatoes put half an ounce of butter, and a tablespoonful of milk; do not make them too moist; mix them well together. When the potatoes are get- ting old and specked, and in frosty weather, this is the best way of dressing them you may put them into shapes, touch them over with yelk of egg, and brown them very slightly before a slow fire.

And for my final potato fact, I had mentioned that the stacked potato-based product, Pringles, aren't considered potato chips due to the way they are constructed by using a sort of potato dough. At first Pringles were marketed as "Newfangled Potato Chips" before other potato chip manufacturers argued that the potato chip term should only be applied to sliced potatoes with the FDA eventually making a similar distinction. In the year 2007, Procter & Gamble (the previous makers of Pringles) embraced their non-potato chip distinction when they argued in British courts that Pringles should not be classified as chips in order to avoid a tax known as a value added tax (VAT). You gotta love those silly global corporations! Funny enough, I think this episode had more potato facts than my episode named Potato. Check out that episode's playlist here.

As for the other foods I talked about, I spoke about a few candies such as the gum drop, which has a convoluted and mysterious history and the discontinued Altoids Sour Tangerine. I used to love Sour Tangerine Altoids and, like a lot of other people, I had assumed the candy would be around forever. Old expired cans can fetch a pretty penny on the used market but there is a company in Tallahassee, FL named Lofty Pursuits which has reversed engineered the candy and developed a small-scale approach to recreating the treat. If that's the sort of thing you are into, then you can follow along as the company documents their manufacturing process on their YouTube channel. It's really neat watching the process evolve over time as the product becomes commercially available.

Anywho, thanks for reading the blog and be sure to listen over the air on KUCR 88.3FM on Saturdays at 9pm or through KUCR.org! If you'd like, you can also listen to KUCR through Radio Garden or Tune-In.

The backing tracks used in this episode were: