On this week's episode of Hippie Love Turbo, on KUCR 88.3 FM you heard me play a song by Christie Laume and I mentioned how she was the sister-in-law to French singer Edith Piaf. Paif had a rough upbringing which shaped her emotionally charged singing style which included songs such as: Non, Je Ne Regrette Rien and La Vie En Rose which was covered by Lady Gaga in the 2018 remake of A Star Is Born. You can read a little more about Edith Piaf here.

During the halfway point of this episode I talked about how I've been watching the 1971 Japanese action show Kamen Rider. What I like about the show is how each episode is like a condensed B-movie that's full of rubber monsters, half-baked science fiction, and most importantly, high speed motorcycle action! The show also features campy fighting scenes that feel like a mix between the 1966 Batman series and a more violent version of Power Rangers. Speaking of Batman, in the second episode our hero fights a monstrous man/bat hybrid that has also cleverly been named Bat-Man, although the Bat-Man of Kamen Rider is a literal man with bat-like features that infects people with his viral saliva, vampire style. In a sense, Kamen Rider's Bat-Man shares more in common with the DC Comic character Man-Bat that first appeared in their 1970s Detective Comics series. 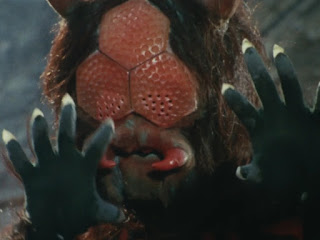 The first episode in the series also features a man/beast hybrid that has another name that you may be familiar with, Spider-Man. Much like DC's Man-Bat, Marvel also played around with a literal version of Spider-man in their 1994 cartoon series by introducing a plot in which Peter Parker's abilities lead to him mutating into a more spider-like form until he becomes Man-Spider. Personally, my favorite twist on Spider-Man is a toss up between Spiders-Man, which is a version of Spider-Man which is made up of a bunch of spiders sharing a collective version of Peter Parker's psyche or Covered In Spiders Man, a bootleg toy made by the artist known as Obvious Plant. There are a ton of Batman and Spider-man spin offs/bootlegs and homages that could probably fill an entire book but I'll have to leave that for another day. Until then you can checkout this week's playlist below.

This episode of Hippie Love Turbo , on KUCR 88.3 FM was a little bit of a contrast to last week's shorter songs, with a few tracks reac...