On this episode of Hippie Love Turbo Radio Show, on KUCR 88.3 FM, you heard a song by Baker Knight and The Knightmares named Hallucinations. I had mentioned that British neurologist Oliver Sacks wrote a book of the same name and that there is an excellent interview with him on NPR's Fresh Air. However, that wasn't the only book I mentioned on this week's show! I also spoke a little bit about Jeff "Beachbum" Berry's book Intoxica which shares a name with another song that I played by The Centurians. 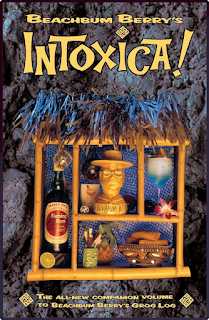 The book is a ton of fun with a bunch of period correct illustrations and short histories about famous "tiki bar" themed locations that may have been forgotten by time. I haven't tried any of the drinks which Mr. Berry has compiled but they sure do sound tasty!

Of course, we can't forget about this week's trashy horror film Twins of Evil. The majority of horror films that I've watched over the years would fit into the "gothic" genre or what I like to call "castle horror." You know the type of film, a person gets an inheritance from a spooky dead relative or someone travels to a cursed location. Nobility, religious overtones, castles, cobwebs and dungeons all play important roles in the genre and Twins of Evil checks off all the right marks.

Twins of Evil is a Hammer Film that sits firmly in the middle of their typical quality. I wouldn't say it's the worst Hammer film I've seen but it definitely isn't the best. The film is the final part of a series of vampire films written by Tudor Gates with the other two being: The Vampire Lovers and Lust for a Vampire. The three films don't hold any sort of continuity but rather they feature similar character names and themes related to the 1872 Gothic novella Carmilla.

Twins of Evil follows two recently orphaned sisters that stumble upon differing paths in life after moving in with their Puritan uncle Gustav Weil. Although the film is named Twins of Evil the only evil twin is Frieda Gellhorn, played by Madeleine Collinson. Frieda's sister Maria is innocent and polite. She views the world with a sense of wonder and is played by Madeleine Collinson's real life twin sister Mary. Everything in the film follows a simple pattern of good and evil with the most dynamic character being the Puritan uncle Gustav whose character development only really takes place towards the end of the film. Maria is good and Frieda is bad. Gustav follows the teachings of Christ and Count Karnstein worships the Devil. Maria falls in love with the caring teacher Anton and Freida falls for the abominable Count. You get the picture.

The main feature of the film, as is often the case with Hammer Films, is the eye candy. The Collinson twins were famous for sharing the Playboy Playmate of the month title in October, 1970 and from the film's costuming you can tell Hammer was banking on that sort of hype. It was taboo for twins to be seen in such an erotic light and the more you think about it the weirder it gets. My favorite thing about the film besides the setting is Damien Thomas as Count Karnstein. The character is so painfully silly despite his evil and unusual deeds. In fact, I'd say the Count is one of the few reasons to watch the film. Peter Cushing basically phones his performance in but the Thomas' performance is divinely over the top. If you dig campy satanic ceremonies, vampires, and witch burning you'll find this movie worth a little bit of your time.

The Poor Boys - Wash Board

The Dan-Dees - Think About It

Ides Of March - You Wouldn't Listen